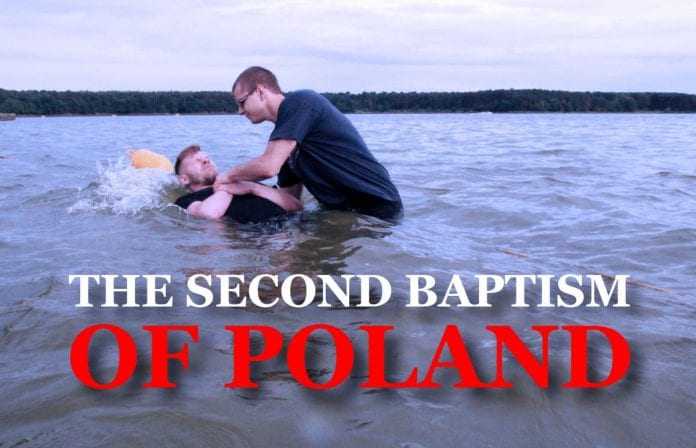 From a tender age we are told that Poland has been a Christian country for over a thousand years. Yet, if we look at the timeline of Polish history, we will see that at about halfway through our recorded history something happened that reversed the good fortune of our nation. In the 15th century we easily defeated one of the greatest military powers of the time – the Teutonic Knights of Saint Mary. We repelled the Catholic crusade against Poland and her allies in 1410 at the Battle of Grunwald. We prevailed over the Islamic Turks, and we chased the Russians away, back to Asia. The entire Christendom regarded Poland as the only country of tolerance and freedom in the world. The Jagiellonian University was at the forefront of  the leading intellectual trends of the day, and the first king of the Jagiellonian dynasty, Władysław Jagiełło, gave the Poles the first Bible in their own language (the Bible of Queen Sophia, some 100 years before the Luther`s Reformation). What happened that a few decades after the Polish Golden Age, Sweden – a small Protestant country from the north – was able to conquer our country?

The answer is astonishingly simple. At the beginning of the 17th century our ancestors turned away from God. They abandoned the freedom of conscience, the freedom of religion and tolerance toward other confessions, and adopted religious coercion instead. The whole nation was submitted to one religion in which the true God was replaced by the institution of the Catholic church, where a man – the pope – was worshipped as the substitute of God on earth. For a long time Poles couldn`t understand the causes of their misfortunes. They came up with the ever more foolish explanations for their tragic history, and the process reached its heights in the early 19th century when a theory was forged that Poland was the Messiah of Nations. The proponents of this theory, who did not know the God of the Bible, taught our nation that all our misfortunes: captivity, bloodshed, plunder, rapes and killings were the signs of a special God`s blessing for Poland as a chosen nation. No wonder that the successive generations of Poles rebelled against such cruel God, and Poland, having retained an outward semblance of Catholicism, in reality became an atheist nation. The void that followed the rejection of the God of the Bible was easily filled by socialists and communists.

On the cover you can see a photo of a biblical baptism which consists in submerging a man in water. This is a sign and testimony that the man has trusted Jesus Christ who died to save him from Hell which is the effect of sin. The Bible clearly shows that this is an individual decision that every man on his own – without any mediators – has to take and open the door for Christ. Therefore, it is impossible to convert and baptize the whole nation through the decision of an earthly ruler. Becoming a Christian is an individual, not a collective decision.

If the Poles are to break this chain of disasters resulting from turning away from the God of the Bible which have been befalling our nation for the last 400 years, they have to understand the cause of these disasters, and one by one come to Jesus Christ for rescue. Futile are all incantations that we are a Christian nation. God will not be deceived by appearances and religious rituals. In 966 AD the Polish ruler, Mieszko I, and part of his entourage were baptized, not the nation. There are no more kings and princes in Poland today. The decision to convert and be baptized can be only taken by you yourself alone. If there is so many of us that we are be able to influence the thoughts and dreams of the whole nation, God will turn His angry gaze from Poland and bless our nation. This was what happened to the poor but brave settlers in the British colonies in America, who chose personal and political freedom in Christ. In just 200 years they built the most powerful nation in human history. In our lifetime we witnessed a similar example of South Korea. Even though Korea, like Poland, experienced bloody occupation, it eventually turned into a powerhouse of Asia. This happened within one generation of Koreans, who had the wisdom and courage to abandon the godless cults of their ancestors and turn to the God of the Bible. God wants to do it in Poland with your generation. This is already happening!